PART THREE
September 30th Yellowstone National Park
We packed up early and headed for Yellowstone.  We took the John D. Rockerfeller Scenic Byway  Highways 89/191/287 to Yellowstone NP.  On the way we passed through the Berry burn area.  This fire was started by lightning on July 25, 2016 and consumed 20,000+ acres.  The fire was managed for ecological benefits.  The highway was closed for 5-6 days as was Flagg Ranch.  There have been 4-5 fires in Yellowstone, but we didn’t see any smoke or fire aftermath.  The Maple fire consumed over 45,000+ acres near the West entrance to the park.  We crossed the Continental Divide 3 times this morning reaching an elevation of 8,391.  We have been to Yellowstone 3-4 times, but only for a day at a time and this stop was no different.  We agreed that we need to spend 4-5 days in the park exploring.  Frank thanks for the information on Madison Campground and places to fish.  When we picked up our Yellowstone fishing license, the ranger suggested going west on the Madison as the fish would soon be spawning and there should be an abundance of fish as reported by others.  Also it was good that we made reservations at Madison as the campground was full. 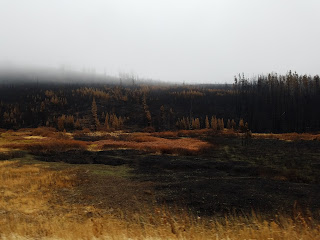 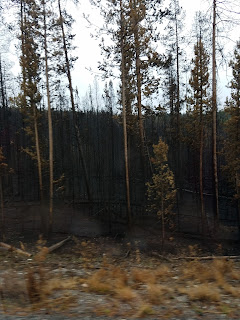 On our way into the park we stopped to see if we might see Old Faithful Geyser.  We arrived 15 minutes before the next eruption and were able to get some nice photos. 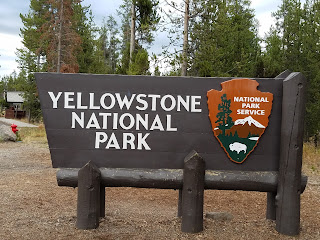 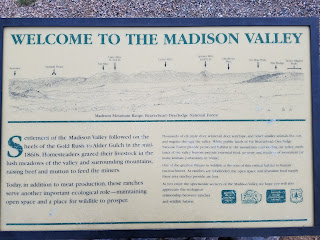 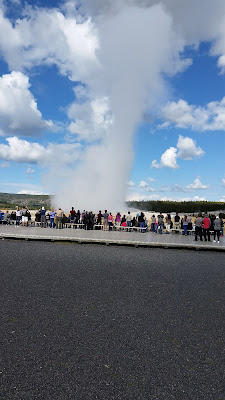 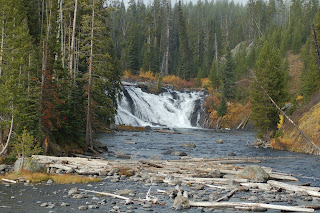 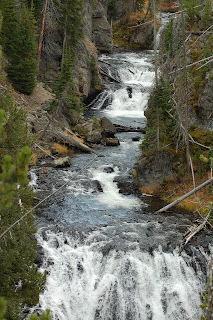 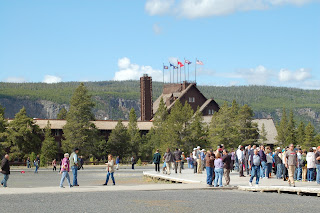 We continued onto Madison Campground where we had a reservation for one night.  Once we got our campsite set-up we drove toward the West entrance and found a nice place to fly fish.  It was a beautiful sunny day and I was able to get in a couple of hours in the Madison River.  I saw a number of trout and cast my fly into this small pool, only to get a couple of nibbles.  There was a nice wood boardwalk that Susan set-up her chair and our lab Sarah kept a watchful eye me.

A photographer showed up and he took a bunch of pictures of me fishing and gave Susan his e-mail address.  Paul Novak sent me a couple of pictures (more to come later) and included some wildlife photos included below.  I sure would love to claim them, but I can’t and furthermore don’t have the camera equipment to get those type of photos. 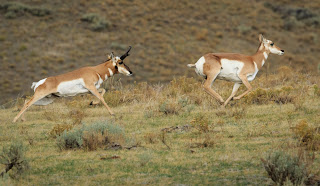 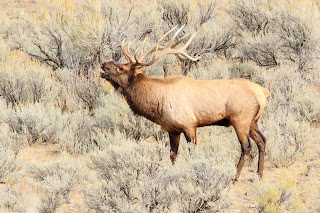 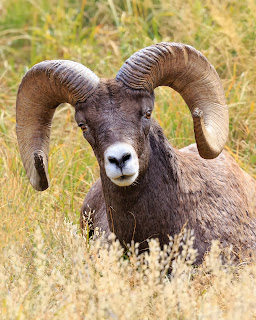 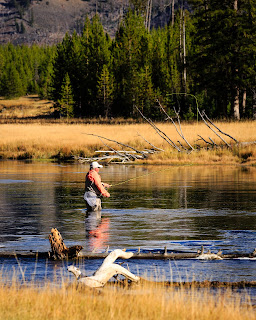 We grilled dinner and then went to the campground amphitheater to listen to the ranger speak about the things that contributed to Yellowstone.  It was a great presentation.  As a young boy, I was visiting my cousin’s ranch in July 1959.  Shortly after returning home the Yellowstone Quake Lake earthquake struck.  The date was August 17, 1959 and the quake struck at 11:37 p.m. when campers were sleeping.  The quake measured 7.3 – 7.5 on the Richter Magnitude Scale and resulted in 28 deaths.  The side of the mountain slide into Lake Hebgen, damming the Madison River and forming what is now called Earthquake Lake.  The Lake formed approximately 9-1/2 miles downstream of the Hebgen Lake Dam.
Posted by JD & SuB Travels In A Pop-Up Camper at 10:53 AM