October 1st – 2nd Virginia City, Nevada City, Dillon, Melrose, Glendale, & Vipond Park
In the morning we left Yellowstone and headed to our next destination, Vipond Park.  We passed through Ennis, MT, a small western town and pulled off the road to take a picture of Spanish Peaks and Lone Mountain (Big Sky, MT). On the way we stopped in Virginia City to explore and take some photos.  We really needed to spend an hour or so in Virginia City, so next time we will walk the streets and visit the sites. 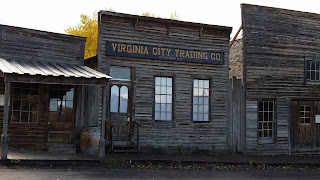 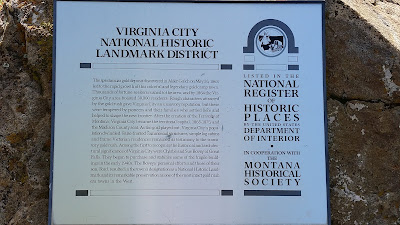 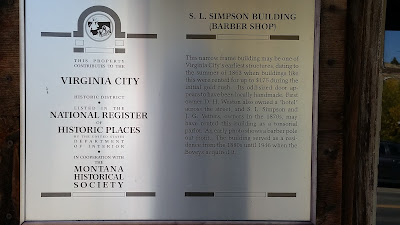 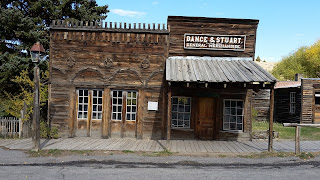 We drove through Nevada City without stopping.   The drive took us along the Ruby River with the Ruby Range and Tobacco Root Mountains on either side, a very pretty drive.  We took a detour south on Hwy 141 to Dillon, MT.  It had been a week since we had a shower and I had researched YMCA locations.  The “Y” in Dillon was 3-4 years old and since we are “Y” members the hot shower was free.  That was a great way to start week two.  During a stop for beer and ice one of the owners (Steven Wilkerson) of the Jackson Hole FWC Distributor pulled up and introduced himself.  He and his wife were in town for a rodeo their daughter was competing in.  We had a nice visit before we hit the highway.

We drove North on I-15 and exited at Melrose, MT.  We drove to Glendale were the ghost town and remains of the old smelting plant are located.  We walked around and took some photos.  Foy thank you for your contribution on Glendale, Vipond Park, and Rock Creek.
***Photos***
We continued up the muddy gravel road to the Kilns.  The Department of Agriculture has restored three (3) of the Kilns.  Here they made charcoal for the smelting operation in Glendale. 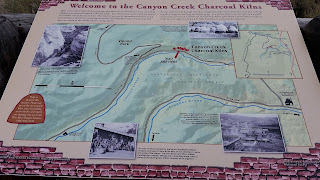 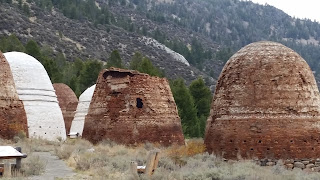 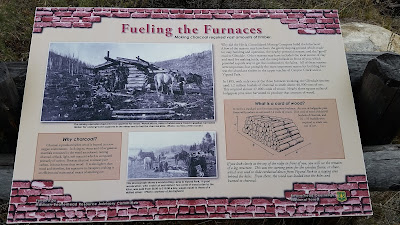 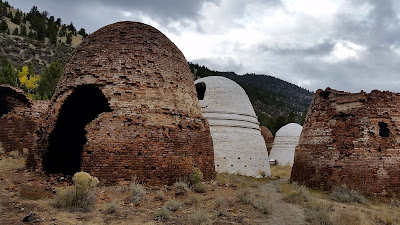 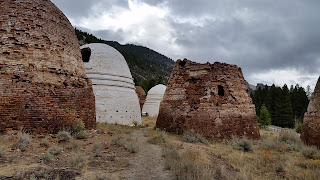 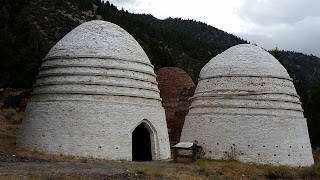 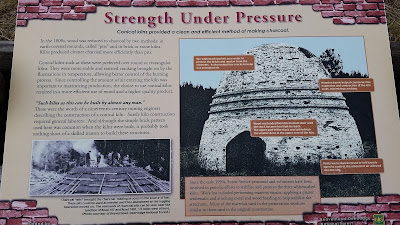 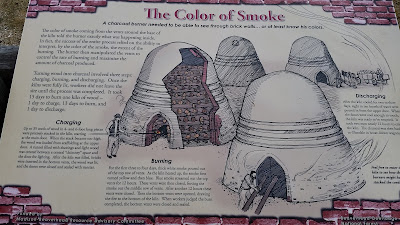 In 1875 a 40-ton smelter was built downstream on Trapper Creek about five miles northeast from the mines. The settlement of mill workers that grew up around it was named Glendale with a post office being opened the same year. Numerous smelter employees and their families soon made their home in Glendale, which was much tamer and civilized than the (mostly male) mining camps upstream. The population averaged around 2,000 souls for the nearly 30 years the smelter operated. Ruins of the smelter and several other buildings remain.
Furnaces in a smelting operation require large amounts of fuel to heat the ore in order to release the precious metal trapped within. The primary choice of fuel for the Glendale smelter was charcoal. Charcoal is produced by burning cord wood under controlled conditions. Initially, charcoal for the smelter was produced via earthen pits where oxygen to the fires could be controlled by dirt piled on top of the wood. While this method was easy and required no capital investment, it was inefficient. In the early 1880’s twenty three brick kilns were constructed about five miles northwest of Glendale on Canyon Creek where timber was abundant along with clay for making the bricks. These kilns employed scores of men, both to operate and to harvest the huge amounts of wood to keep them burning around the clock. A good wood cutter who could cut and deliver two cords of wood per day was paid $8 – $10 for his efforts. As wood was depleted in the immediate area around the kilns a wood chute was constructed up the steep hillside to the north to access the large plateau area above known as Vipond Park. If you look up the hillside you can still spot the remains of the platform used to load the wood into the chute. The forest service has restored three of the kilns to their original appearance and installed interpretive signs.

Those looking for additional areas to explore will want to head up to Vipond Park where you will not only find the remains of the wood cutting operations, but smaller mining operations and the ghosts of the Vipond brothers who settled in the area in 1868.Wide open adventuring in the East Pioneer Mountains is a great adventure in RVing!
To get there and visit: Head west from Melrose on Trapper Creek Road to Glendale, which is located at: N45° 38.530 W112° 46.943 Note: Glendale is located on private property and you are requested to please view the remains of Glendale from the public road.
To reach the Canyon Creek Charcoal Kilns: Turn right on Canyon Creek Road on the west “outskirts” of Glendale. Continue on Canyon Creek Road for about 5 miles, until you reach the kilns at: N45° 40.771 W112° 52.215
Those wanting to continue and possess way finding skills will find the platform of the wood loading chute at: N45° 41.123 W112° 52.207 The roads to Glendale and the Kilns are will graded and suitable for two wheel drive vehicles. The road to Vipond Park is a steep single lane road, not suitable for longer vehicles.

After walking around and in the kilns we continued on for our trip up to Vipond Park.  Foy, we took the steep gravel road up from Canyon Creek.  I didn’t share anything with my wife ahead of time, and as we drove up she commented many time how beautiful the view was.  We had a couple of vehicles pass in the opposite direction which didn’t cause any heartburn.  Susan even got a picture of a rainbow over the valley.  Only after reaching the top did I share with her your wife’s thoughts as she looked out the window at the 1,000 foot drop.  No fear from my co-pilot.
We drove the Quartz Hill Road and I had plotted out 8-10 old mines.  After going a mile on the first dirt road, we turned back to Quartz Hill.  There may have been more up the road but we didn’t continue.  I had used the satellite view to locate the remains of many mines, some that appeared to be just off the Quartz Hill Rd. but no luck.  There were many forest service signs directing vehicles to stay on the main roads.  We pulled off on a side dirt road and into the pine trees to set-up camp.  It rained off and on so we got a couple of walks in with the dog.  She was very interested in the “Cow Pies”. 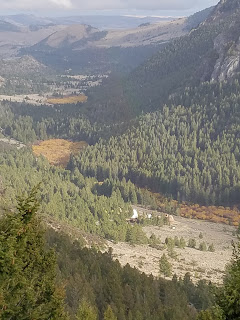 Drive up to Vipond Park 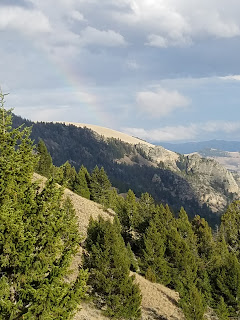 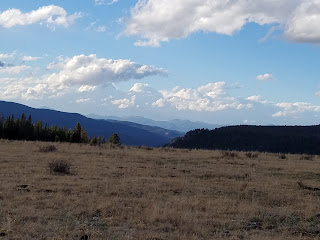 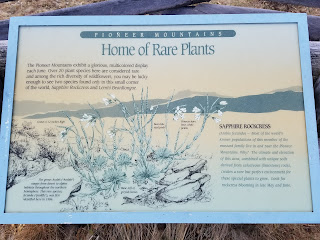 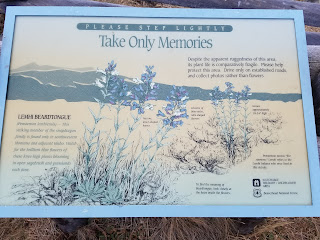 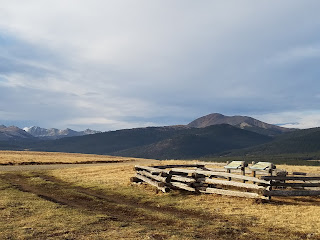 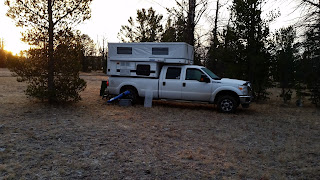 The first mining claim in the Quartz Hill area was located by John Vipond in April of 1868. Additional prospecting resulted in more claims being filed and the need for a good road to transport supplies and ore. During this time the town of Dewey developed along the Big Hole River at the base of the drainage leading up to Quartz Hill. In order to get ore to the smelters, the miners built Quartz Hill Road from the mines down the canyon to Dewey. As a result of being located at the receiving end of Quartz Hill Road, Dewey thrived as a supply and milling center for the mines.
The most productive mine in the Quartz Hill area was the Lone Pine, which was located in the late 1870s. In 1891 it was sold to an English syndicate for the handsome sum of $725,000. The new owners installed a 25-stamp mill and a concentrating plant at the mine which produced $33,000 in silver monthly in addition to smaller amounts of lead, zinc and copper. The first boom ended in 1895 when low silver prices and a depletion of good ore forced the mines to close. In 1928 the Quartz Hill Mining Company bought the properties and reopened the mine when a new ore body was discovered a few hundred feet southwest of the original Lone Pine vein. This new discovery was called the West Lone Pine and was a steady silver producer from 1933 to 1950. The buildings you will see during your visit to Quartz Hill are from this period.
Although most of the Quartz Hill’s production came from the Lone Pine mine, there were a number of other mines which contributed. The Aurora Mine produced 663 tons of ore from 1933 to 1936 from workings located about 1/2-mile northwest of the West Lone Pine mine. Another significant producer was the Monte Cristo Mine, located about 1.25 miles north of the Lone Pine, which produced 19,872 ounces of silver. Ruins of both mines remain with the most interesting being located at the Monte Cristo. The still-standing multi-compartmented ore box at the Monte Cristo is made of logs rather than sawn lumber typical of such structures. 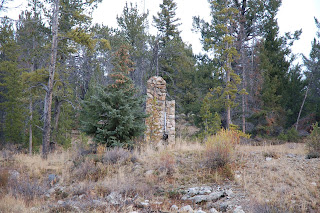 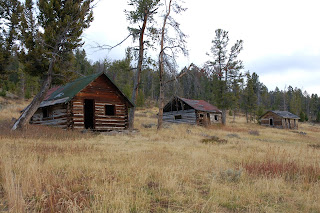 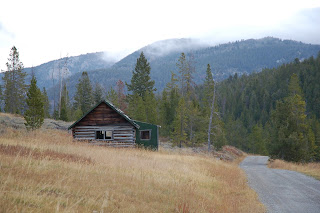 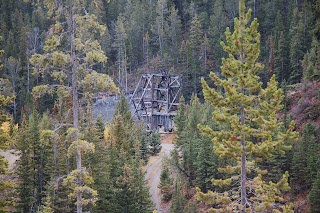 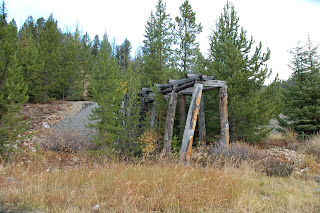 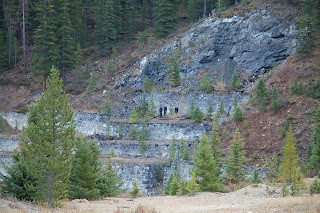 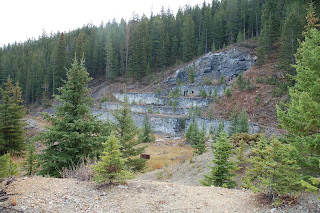 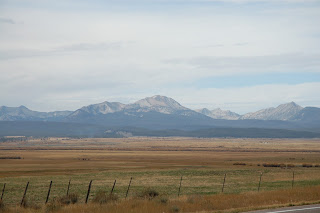 Pioneer Mountains
Posted by JD & SuB Travels In A Pop-Up Camper at 11:00 AM