PART SIX
October 4th – 7th Big Timber, MT
We continued on to Big Timber, Mt.  My cousins have several large cattle and sheep ranches, and one cousin was the former mortician, mayor, and fire chief in Big Timber.  We stayed in town at one cousins house.  We stayed in the camper and it was fun listening to the train horn each time the trains passed through town during the night.  Mid-morning we drove to their cabin in the Absorka-Beartooth Mountains.  Their cabin is a concrete log cabin and its features are so real that is hard to tell that it isn’t wood.  15’ from the porch is the Boulder River. 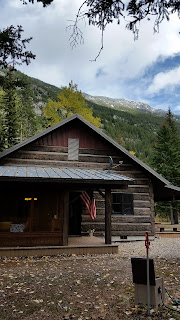 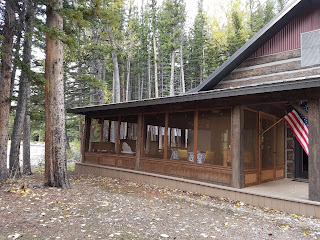 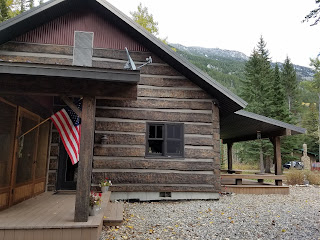 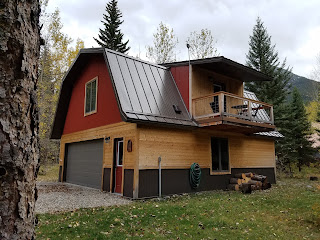 Doug and Jane cooked a huge meal the first night and Sarah was very happy to be in a house and out of the camper.  She was well pampered, spending time laying in front of the fireplace. Later in the afternoon I got my waders on and spent 2 hours fly fishing in several different places.  I again had no bites.  With all of the fishing licenses I figured I paid about $135 per nibble.

The next day a Bald Eagle flew down stream while I was in the camper getting ready to leave later.  I heard all about it when I walked inside the cabin.  I got my camera out and Doug told me it would be back shortly and sure enough it landed on the rocks in the middle of the river.  It took off flying back down river and my cousin said it would return again.  I sat on the bench for over 30 minutes waiting for that picture of a lifetime.  I went back into the camper for 30 seconds and when I went inside I was told that it returned flying 20’ over the river back upstream.  If I had waited another minute I would have gotten pictures from about 15’ away.  I guess that is what the word patience means.  After 30 minutes I had none. 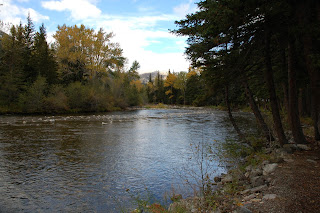 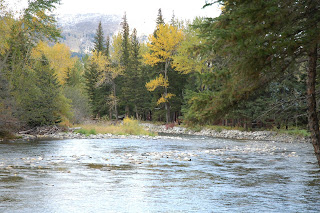 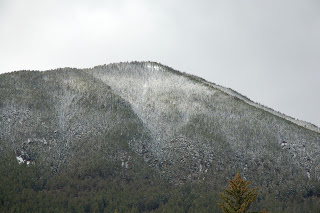 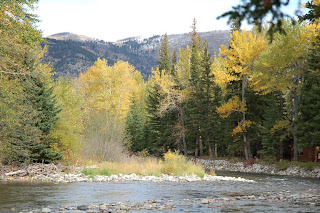 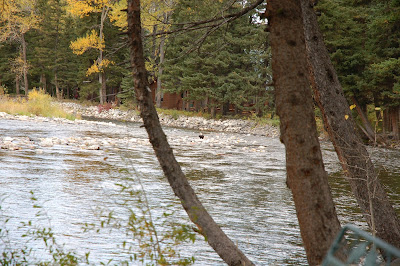 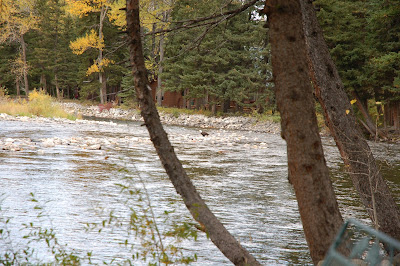 We took a drive up into the Boulder Canyon.  All of the mountains, Crazy Mountains,             Absorka-Beartooth Mountains all got heavy snow At the high elevations on October 2nd 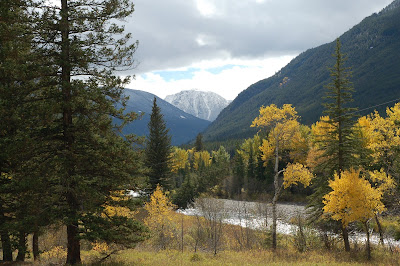 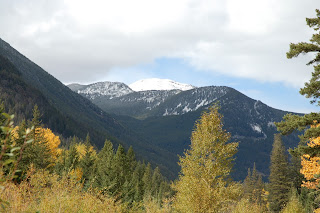 Rae Mountain
We returned to Big Timber and had a reservation at the Grand Hotel.  Doug and Jane and my other cousins and their wives all joined us for a great dinner.  The Grand Hotel is one of Susan’s and my favorites and we make sure that we spend at least one night there on each visit.
Posted by JD & SuB Travels In A Pop-Up Camper at 7:09 PM